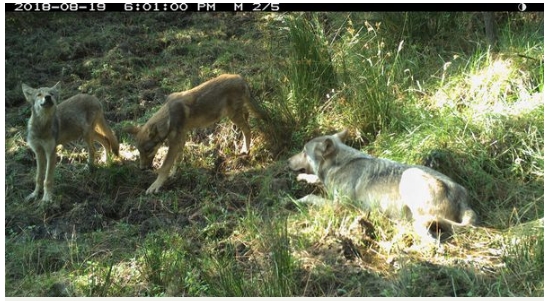 Two wolf pups were observed on the Warm Springs reservation in early August, marking the first time the wolves have successfully bred in Oregon's northern Cascades since the animals returned to the state.

Biologists with the Confederated Tribes of Warm Springs posted footage of the pups from a trail camera that was shared on Facebook by the U.S. Fish and Wildlife Service/Oregon.

A trail cam put up by biologists with the Confederated Tribes of Warm Springs, Oregon catches a litter of wolf pups responding enthusiastically to the howls of the pack returning to them, hopefully with food! Turn the sound up to hear the adult wolves howling in the background. Another sign wolf recovery in Oregon is going strong. White River wolves on the Warm Springs Reservation have 6 pups this year! Video courtesy of Confederated Tribes of the Warm Springs.

The White River Pack is located just southeast of Mount Hood and east of Timothy Lake.

With five members in 2018, it was one of the few confirmed packs in Western Oregon, along with southwest Oregon's Rogue Pack.

Oregon Department of Fish and Wildlife carnivore biologist Derek Broman told The Statesman Journal that the current size of the White River pack is 11 animals.

The latest wolf count shows Oregon is home to a minimum of 137 wolves. The majority are clustered in northeast Oregon.