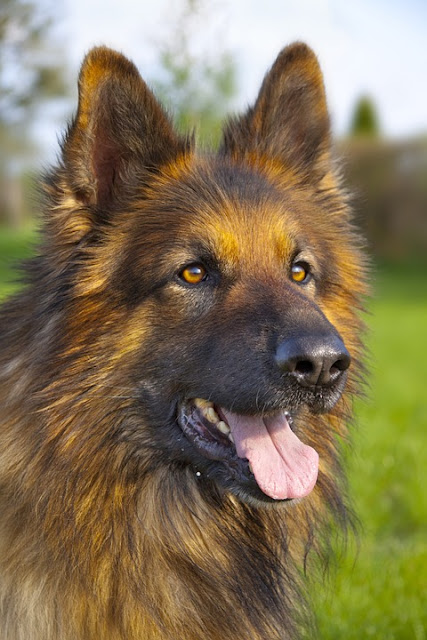 A German Shepherd Dog is fierce but friendly, and has a calm confidence that may seem kind of aloof. When in need, however, a GSD is instantly ready to protect, play a game or perform a task — in some cases as a guard dog, police dog, herder or seeing eye dog.

German Shepherd Dogs (or GSD, as they’re sometimes known!) have a noble, proportioned and commanding look. A typical GSD’s body — slightly longer than tall — is sturdy but lean. He has a slightly convex forehead, long muzzle, pointed ears and almond-shaped eyes that are set (as opposed to protruding) with an amiable expression. The neck slopes down to muscular shoulders and legs. The back legs are solid and the tail bushy. Normally black and tan, sable or just black, they also come in blue and white. They come in three versions: shorthaired (sometimes called rough-coated), medium-haired and longhaired. 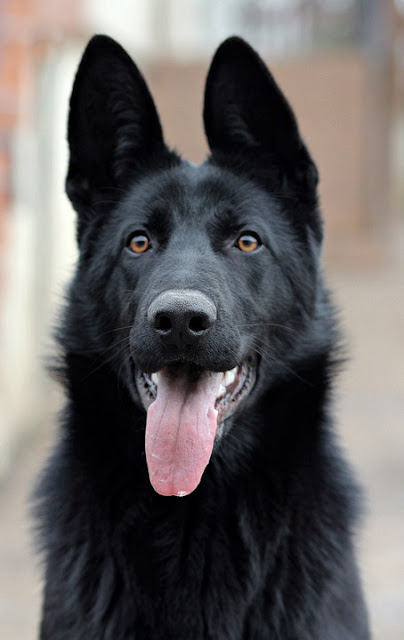 German Shepherd Dogs are fierce but friendly, and have a calm confidence that may seem kind of aloof. When in need, however, a GSD is instantly ready to protect, play a game or perform a task — in some cases as a guard dog, police dog, herder, seeing eye dog or other service dog. With a strong work ethic and an eager intelligence, they crave challenges.

Not to be left alone in the house too long, German Shepherd Dogs crave interaction and involvement. They are fiercely protective of their homes and families — sometimes known to “herd” children — and they get along with other pets. Standoffish and detached with strangers or those outside the family unit, they have been known to “over-guard” or bark protectively.

The benefits of a GSD — loyalty, protectiveness and eagerness, to name a few — come from careful obedience training and authority. Everyone in the household must be prepared to show “authority” and earn the dog’s respect with a firm but loving touch. They do not respond to negativity or anger. Once achieved, this respect may need to be earned again and again.

German Shepherd Dogs don’t need to be bathed very often, but they tend to shed in great quantities. Brush them daily, outside if possible. Like any large dog, they can handle apartment living quite well but need daily walks and, if possible, vigorous exercise to stay sharp.

Some common health problems include hip and elbow dysplasia, skin allergies and pancreas deficiencies, They normally live up to 12 years.

The German Shepherd Dog is a relatively new breed, almost entirely developed in the 20th century. Attempting to create a standard herding dog for his country, German breeder Capt. Max von Stephanitz invented the Deutsche Schäferhunde in 1899 from a mix of early shepherd dogs having various coat lengths, textures, body types and colors. Stephanitz’s aim was to develop a standard sheep-herding dog with the solid intelligence and work ethic to assist farm workers and laborers as well as police and soldiers. Standardized in Germany in 1901, the German Shepherd Dog came to America in 1907 and flourished with the help of organizations like the German Shepherd Dog Club of America.