How your cat sleeps lets you know how it’s feeling

How your cat sleeps lets you know how it’s feeling 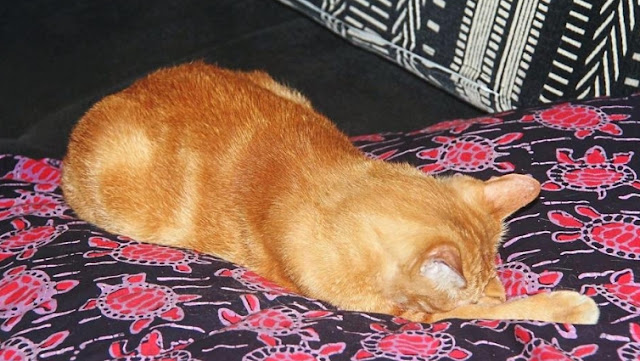 “Swooner has definitely settled in,” I was telling my neighbour. “He’s sitting on the sofa, looking totally at home.”

“He is looking nicely fat,” she replied. “But how can we really tell what animals are feeling?”

It’s a great question, and when I went back inside, it got me thinking. Cats can be rather mysterious creatures but body language can signal how your pet is feeling. Sleeping positions are really excellent insight into the inner kitty because this is when they are at their most vulnerable.

The One Eye Open pose is a favourite of kitchen cats who are expecting trouble from dogs and other enemies. By lying with the paws down, the kitty can zoom off easily if startled. However, it’s also fairly comfy.

Target lies this way when Swooner is on the prowl. When our senior boy is pounced on, the front paws come up. If Target is in a good mood, Swooner is wrestled down and the two boys nip at each others’ ears and bunny-kick in a mock fight. Sometimes, though, Swooner has his ears boxed.

The Donut is where you get a curled up cat, tucking face, tail and paws together. As it’s very hard to switch from this into flight, this relaxed pose means your kitty is feeling safe.

Interestingly, cold climate cats also conserve heat this way. If you have an air-conditioned home, you may see more of this than someone who uses just fans.

Our Guido lies this way often, usually on the corner of the sofa, right underneath the ceiling fan. I think being curled up makes him feel toasty and comfy, and the way the fan ripples his fur, he gets to be nice and cool too.

The Face Plaff is where your kitty lies prone and buries his face in his pillow. The paws come up too for extra protection, covering the eyes.

This is one of Target’s favourite moves at the end of a busy day and it signals, “I do not want to be disturbed”. If you pet him, he will raise his head, and meow in a very irritated way. Then he’ll sigh and stomp off to go and sleep somewhere else.

This pose always tempts me to be evil because when I hide my head under my pillow on a Sunday morning, and Target decides he needs my attention, the naughty fuzz has no problems fishing under it with his paws, poking my nose until I wake up.

This is not one I’ve ever seen in the kitchen cats, probably because the Do Not Disturb message is one their enemies would ignore.

The Full Spread where your pet lies flat on his back, all four paws in the air, vulnerable tummy exposed to any who pass by, is very clearly the most relaxed of all poses.

I never see the kitchen cats lie this way. It’s probably far too dangerous. However, I believe that this is the most common pose among happy pet cats in tropical climates because it’s very cooling. My furries tend to lie this way in the afternoons, strategically placed under a ceiling fan.

What’s interesting about this pose is that it’s the one where cats and people often have misunderstandings. The cat is communicating that he feels safe and happy, but the human sees it as an invitation to tickle the sweet, fluffy tummy.

The thing about kitty tummies is that they tend to be super-private. Anyone who takes liberties will be gripped with the paws and chastised. This can then offend the human who doesn’t understand the miscommunication.

Worse, a cat who has been fast asleep may mistake a friendly tickle for an attack, and respond with claws and teeth. If this happens to you, don’t get angry: your pet thought it was defending itself from danger. If you have kids, be sure to explain they must never rub the belly of a sleeping cat, no matter how cute they think the kitty looks.

If you must pet the tummy, wait till your pet is awake, and rub gently. Generally speaking, kittens will always see a belly rub as an invitation for play. They’ll roughhouse and bunny-kick and have a lovely time doing so.

Older cats can be ticklish, see it as too invasive or they love it. Guido and Target think it’s absolute heaven. Target likes it so much that he’ll come and lie next to me, roll on to his back, and curl his paws while meowing at me.

For our senior cat, tummy rubs are our special time and after a few minutes he’s so happy that he gets up and head-butts me, purring and nipping, just as if I were a cat pal.

So, thinking back to my neighbour’s question, how do we really know what our pets are feeling, I had another look at Swooner. He wasn’t asleep but I got a clear message about what he was thinking, anyway.

He was sitting on the sofa, watching TV with my other half, in a pose that clearly signalled he’d like a beer. What do you think?

Safe places for a happy nap

A happy relaxed cat will go and find his own favourite sleeping spots. However, if you’ve just adopted a kitty, and he’s shy, you can help create a few snuggle spots that will help your pet feel secure when he’s asleep.

> A cardboard box is a cat’s castle. Take one that’s slightly bigger than your pet, and turn it on to its side. Leave the top and one side flap closed. Your kitty will crawl inside, and may pull the second flap closed for complete privacy. When your pet is inside, consider him to have put up the Do Not Disturb sign.

> Leave the laundry stack in a quiet corner. Any heap of clothes means your pet can bury himself in soft goodness. Super-shy cats may go totally camo and cover themselves with your tee or towel. If your pet chooses the dirty laundry pile, he’ll get used to your scent too, which may help bonding.

> Leave a cupboard door open, preferably one with a shelf. Cats like to sleep in spaces where their enemies can’t get to them, which is why strays will sleep on roofs and the tops of doors. If you have a shelf in your wardrobe, your pet may want to adopt this as a safe snooze spot. Be helpful and arrange for easy access and exit. If you have a bookcase, that can be a nice alternative.