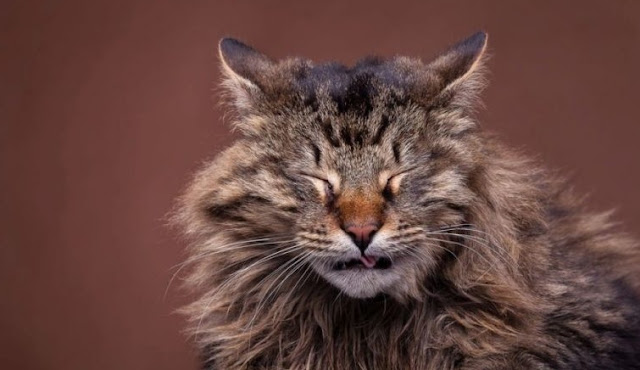 Every now and again, Swooner has the sneezes. As the way he bounced through the day indicated he was feeling in the pink, I thought it was just one of those things.

But a couple of months ago, his breathing didn’t sound right. When I held him up and listened to his chest, it sounded a bit rough.

Now, taking a cat’s temperature isn’t easy. For one thing, Swooner enjoys his rays so it’s not unusual to have him staggering in, drunk from spending hours in a sun puddle in the garden. On those occasions, he is hotter than embers – and totally healthy.

Even when he’s not rolling around in the heat, his coat reflects the ambient temperature well but it’s not so good at telling me about the cat underneath. The only places I can get a sense of core temperature are his ears and his paws.

So, I rubbed his toes which were fine but his ears were too warm for my liking. Not hot, but not what I would call a perfect temperature. When he sneezed a dozen times in a row, I said enough and toted him off to the vet.

Poor Swooner. We have a very kind vet with gentle hands and a soft voice but my pet was petrified. Sitting on the cold metal table, he clung on to my hands with both front paws as he was examined.

The vet pronounced him to be borderline warm, not enough to have an actual fever, but he was a bit chesty. We were sent home with some light meds to clear Swooner’s tubes, and he bounced back. In fact, he got better faster than me. We had a twice daily battle over whether he needed the pills or not, and while I won, it was exhausting.

Then, the dratted thing came back.

Now, I studied psychology at university that included several semesters of animal behaviour but I avoid Googling health issues because I have no medical training. What I do have is an excellent imagination. That means I can research a cold and convince myself I have aceruloplasminemia with a side order of SARS.

So, I asked for a consultation. Our vet is a thorough man, so he suggested a list of possible things going on. At the top was the idea that Swooner might have a residual virus of some kind.

Thankfully, there are some antiviral meds about to enter the market. We got some and, to my joy, there was no need for a daily battle because this stuff is an odourless and tasteless liquid.

I got a smear of tasty liver goop, dripped the meds on top, and called for my kitten. Swooner bounded in, licked it up and demanded more. Of course Target had a helping too – without the meds.

For two weeks, we had a wonderful time. I’d sing out, “Swooner! Medicine time!” and he’d come running up, tail in the air, totally excited. Target would pitch up as well and we’d have party time in the kitchen.

Swooner seemed okay but then the sneezes came back again. It was no big deal, just sneezing, but at this point, we held a Dr House meeting, with our vet listing everything it could possibly be, from simple to outrageously silly. I got a second opinion as well.

We were left with three possibilities. When they mentioned feline immunodeficiency virus (FIV) and feline leukemia virus (FeLV), I practically died of fear. My head told me they’re manageable conditions but my heart tried to beat its way out of my body.

Thankfully, there’s an instant test. OK, an instant test that takes half an hour. Swooner stuck out his paw and had a little blood drawn, and then we had to brick it.

Of course, that would be the day the vet was super busy.

The place was loaded with dogs and cats, so we went home and waited. Swooner was fine. He went off to tell his cat pals all about the horrors he’d suffered while I sat in my office and pretended all was well.

I reminded myself that Swooner has excellent teeth and gums, heals from scrapes in an instant, and packs away enough tuna for a passel of hogs, all indications that he didn’t have either problem. But it was a tense time. After three hours of agony, a text winged in: Swooner was all clear on both.

At that point, we celebrated. I made roast chicken, and the cats feasted. Target was so chuffed that he had fifths.

Afterwards, I broke out the meds for the third option: an antihistamine. Because now that all the dreaded dangers have been eliminated, it’s most likely that our junior cat has allergies.

Once the food had settled, I picked him up and gave him the pill. He didn’t like it, he fought me tooth and claw, but he swallowed it. And within a short time, he was sniffle-free.

Over the next few weeks we’ll repeat the experiment and note the results carefully. Afterwards, I’ll go back for another consultation, probably minus the cat.

As circumstances suggest we’ve nailed it, I think we have it licked. It’s a massive relief.

Curiously, Eko the Sumatran tiger who lives at Oklahoma City Zoo in the United States has just been diagnosed with allergies to red cedar, cocklebur, aspergillus and environmental molds.

That big boy is also on oral antihistamine medication and will soon start allergy injections.

I’m dead curious how Eko’s keepers will give him his pills. I bet they’re not holding him down and sticking it in the back of this throat!

As for Swooner and Target, they’ve decided that weeks of twice-daily treats are an innovation they approve of.

I’ve been purr-suaded to continue the tradition; from the quivering tails and whiskers twirling, it’s hitting the spot.