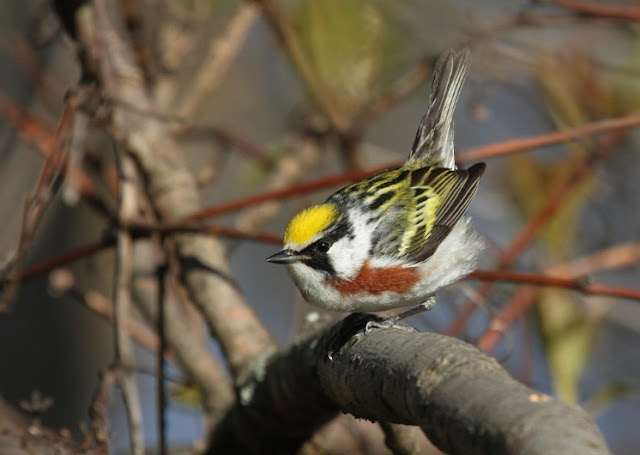 Over the last decade, Milwaukee County Parks has carried out 5,000 bird surveys and documented close to 370,000 birds throughout the system.

That work contributed to Milwaukee County Parks’ recent designation as an Important Bird Area (IBA). It is granted by a group called the Wisconsin Bird Conservation Initiative.

“It’s a coalition of 180 different partner organizations – not necessarily specific to birds but conservation statewide – and they have a pretty rigorous process we have to go through and justify our ability to be an IBA,” says Milwaukee County Parks Natural Areas Coordinator Brian Russart.

Milwaukee County Parks joins 92 other IBA sites in Wisconsin. There are 2,832 around the United States and 12,000 around the world.

His team of four, including Russart, manages 10,000 acres of natural park areas. Russart says without the help of volunteers their work would be impossible.

Rita Flores Wiskowski, of South Milwaukee, is one of those volunteers. She’s kept track of a lot of birds in Grant Park.

“This spring I spent a lot of time at the tennis court pond, and it had the prothonotary warbler, the hooded warbler ... so it ended up being this great little spot that nobody else was flocking to,” Wiskowski says.

As a land manager, Russart can see the data collected by volunteers.

“It directly impacts our land management decisions. So, going out and doing something [Rita] absolutely loves to do, she's actually changing how the park system is managed,” Russart says.

That includes improving habitat in strategic pockets of the parks.

“We have areas ... that are now young forests that was just mowed turf grass that was not being utilized by the public, so we had an opportunity to convert that to the habitat,” Russart says.

The parks system has started planting about 20% of its trees with a changing climate in mind.

“Kentucky coffee tree, American sycamore, some pecans. So, a variety of these species that are native to the United States, monitoring to see which species are doing well, which ones can handle the colder winters and which ones can’t,” Russart says.
"Getting this designation is just incredibly rewarding to all of the hard work our volunteers and team have put forth in the last decade." - Assistant Natural Areas Coordinator Emilie Burmeister

His colleague, Assistant Natural Areas Coordinator Emilie Burmeister, is still savoring the IBA news and what it took to earn it.

“All the mornings that we’ve gotten up at the crack of dawn to look for breeding birds, and all the bug bites. We get warbler neck from cranking our neck to look at the tops of trees. Getting this designation is just incredibly rewarding to all of the hard work our volunteers and team have put forth in the last decade,” Burmeister says.

IBA isn’t simply for the birds. It’s about engaging the public in the conservation effort. Volunteer Rita Flores Wiskowski says she takes a people-centric approach.

“When I've come here this spring, there were more birders in this park than I’ve ever seen in the spring from all over Wisconsin. So, that’s a really cool thing to have in our county to bring people in to enjoy our parks. I think people are as important as nature,” Wiskowski says.

She hopes people are inspired by the birds — like the piping plover, "a federally endangered bird and is just as cute as cute can be. They stop here every early spring ... they’re like little cotton balls with legs … so I encourage people to look for those and enjoy them,” Wiskowski says.

She might be as powerful a conservation tool as the IBA designation.

Milwaukee County Parks will celebrate its IBA designation Thursday at 10 am in Lake Park.

"There's no large manual for managing urban natural areas. There's so much research that's been done in rural and wilderness areas. That's where the restoration and ecology profession has spent a lot of its time. Urban natural areas management is relatively new," Russart says.