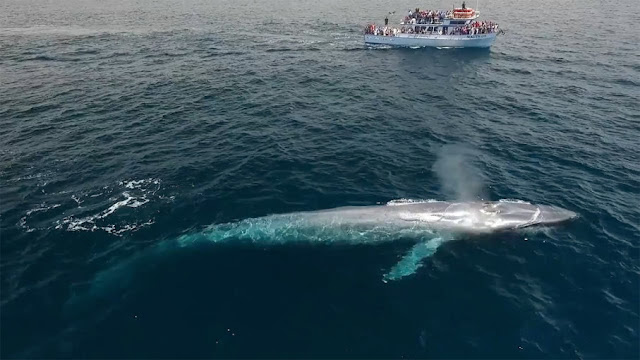 Blue whales (Balaenoptera musculus) are even bigger than the largest dinosaurs that ever lived.

Dating back to the days of woolly mammoths, humans have been obsessed with larger-than-life mammals. And on the aquatic front, there's no bigger mammal than the blue whale (Balaenoptera musculus), which is the largest known animal to ever grace the planet.

So Exactly How Big Are Blue Whales?

Adam Ratner, a marine scientist with the The Marine Mammal Center, confirms that "blue whales are the largest animal on the planet and the largest animal identified that has been on this Earth." No evidence has been found that any other creature — even the largest of dinosaurs — surpassed the blue whale in size. But wait! What about the Megalodon, an extinct shark species believed to be the largest fish on planet Earth (and which you may recall from the 2018 horror movie The Meg)? Well, scientists guess that even the biggest Megalodon only reached a mere 58 feet (18 meters) (though some argue it was up to 82 feet [25 meters]). By contrast, the largest blue whales clock in at a little more than 100 feet (30 meters) long, and on average are between 75-90 feet (23-27 meters) in length. The largest blue whales live in the Southern Ocean near Antarctica.

Ratner shares some other startling facts about the blue whale's mass.

The spray from a blue whale's blowhole is almost as tall as a three-story building (30 feet, or 9 meters, high).

All these statistics are daunting, but what do blue whales really look like? They are blue-gray in color — hence the name, though they also goes by "sulfur-bottom whale" due to their yellowish underbelly — with lighter gray patches that resemble splotches of paint. The blue whale is part of the baleen whale family — a group of toothless whales — and so its mouth "contains up to 800 plates of short, wide, black baleen or 'whalebone,' with thick, coarse bristles used for catching food." Perhaps surprisingly, female blue whales are usually larger than the males.

What Do Blue Whales Eat?

Because of their enormous size, you'd be forgiven for thinking that blue whales must chow down on some pretty big prey, but that's actually not the case. Despite their massive girth, blue whales rely on very tiny, two-inch crustaceans known as krill as their staple meal. And boy, do blue whales eat a lot of krill.

Ratner shares that "given their size, blue whales rely on vast quantities of food. Using plates of baleen to filter small zooplankton from the water, they can consume up to six tons, or 12,000 pounds (5,443 kilograms) of krill each day." He continues, "In one gulp, the blue whale can take in 125 percent of its body weight of water and krill (250 tons). That is half a million calories!"

Despite all the hubbub over their hefty size, not much is known about blue whales' behavior in group settings, though they are not believed to be aggressive. "Very little is known about blue whale social structures. We do tend to see blue whales traveling alone or in small groups," says Ratner. "In terms of behavior in the wild, they don't tend to be very belligerent to each other or other animals, but rather focused on feeding or migrating, but again, behavior during breeding season could be very different and is still in need of more research." But marine biologists are studying one way that blue whales communicate with each other: sound.

"Blue whales produce one of the loudest sounds in the animal kingdom, a low rumble that can be heard hundreds of miles, and even reported to be thousands of miles away in the ocean," says Ratner. "Researchers are still unsure of the meaning of the vocalizations though, with best guesses being around finding mates or signaling opportunities for mating or feeding."

Jeff Jacobsen, a marine biologist with the Noyo Center for Marine Science, expands on the sounds of blue whales, which scientists use to estimate whale population size, among other factors. When these whale calls are repeated in a sequence, they become known as songs. Only male blue whales sing, however. "These songs differ by ocean basin, region. Their low frequency calls can be detected at very great distances, depending on ocean conditions," says Jacobsen in an email.

The frequency of their songs is affected by noisy conditions caused by objects like passing ships. Blue whales adjust the frequency of songs "by blowing air through their vocal cords at a faster or slower rate," according to a study which was conducted by a group of researchers at Oregon State University and published in August, 2017, after they observed a gradual decline in the frequency of blue whale calls. Scientists are still trying to figure out the meaning of these songs. Though since only males sing, these songs could be a factor in mating and courtship rituals.

If you're curious, you can listen to the sound of blue whales at Blue Whale Vocalization.

According to Ratner, female blue whales give birth to a single baby calf every two to three years, following an 11-month pregnancy or gestation period. These blue whale babes typically are a whopping 25-feet-long (around 8-meters-long) and weigh 7,000 pounds (3,175 kilograms), which is heavier than a mid-size SUV. "The milk from their mothers is so nutritious that the calves gain 200 pounds (90 kilograms) a day nursing," says Ratner.

Little is known about how blue whales mate, however. "Mating behavior is still being studied, though so far it seems that males defend females from other males. We see impressive surface behaviors during the fall of two males 'fighting' for a female," says Jacobsen.

John Calambokidis, a co-founder of the nonprofit Cascadia Research and research biologist who has conducted extensive studies on the movement of blue whales, expands on the whales' possible mating habits, including how they communicate and socialize with each other: "One feature of blue whales is the extremely loud calls they make, and we have recently discovered these very loud calls are produced only by males, indicating it plays some role in mating or competition with other males." He notes that blue whales will also form male-female pairs during mating season — notably, with the female leading the pair. Competition for mates can also get a little intense, apparently. "There is also a competition involving high speed swimming that occurs when more than one male is involved," says Calambokidis.

How Many Are There and Are They Endangered?

A blue whale's average lifespan is 80-90 years. However, their existence is increasingly under threat. Blue whales are currently listed as endangered under the Endangered Species Act. As commercial whale hunting took off in the early 1900s, blue whales dropped from a pre-whaling population of 250,000 to an estimated 10,000-25,000 individuals alive presently, according to Ratner.

Calambokidis, says that "the [blue whale] population is still under 5 percent of what it was prior to whaling, with most of this decrease from the Southern Hemisphere where blue whales were most numerous."

Jacobsen agrees, and says that, "for some reason blue whales were not as impacted by whaling along the [California] coast and we have at least 2,000 individuals here. The population is still recovering around Antarctica." Jacobsen describes how whales still remain highly vulnerable to collisions with ships, which is how the Noyo blue whale — whose skeleton is being restored at the Noyo Center — was killed. "For example, it seems that when there are more krill in the shipping lanes, more whales get hit," says Jacobsen, citing an article by Oregon State University's Whale Telemetry Group.

Other challenges facing the blue whale include entrapment in fishing gear and climate change affecting the mammal's food sources. But there are some organizations working to make habitats safer for blue whales. Ratner says that the Marine Mammal Center has addressed policies about changing shipping lanes in the San Francisco Bay in order to reduce the likelihood of boats impacting migrating whales. He also suggests that "individuals around the world can make a huge difference by examining their carbon footprint, and working within their communities (neighborhoods, schools, work) to reduce their use of fossil fuels like coal, oil and natural gas for energy and transportation, as well as reducing their use of single-use plastics, one of the most commonly found items of ocean trash that can pose a threat of entanglement or ingestion for large whales."

Like many marine mammals, blue whales migrate as the seasons change, but you can find them all over the globe. Ratner says that "Blue whales are found in all oceans, minus the Arctic, and can be found both on coastal shelves and deep, oceanic waters." The whales typically migrate toward the North and South poles, traversing "into colder waters in the summer to feed, while migrating back towards the equator into warmer waters in the winter to [breed]," says Ratner. But Calambokidis adds that blue whales' migration patterns are slightly more flexible than other baleen whales, like the gray whale. This is mainly because blue whales are always in search of food to satisfy their large appetites, so their movements are geared more toward finding food sources than adhering to strict migratory paths.

"Despite being so large, much of their specific movements and behaviors are still unknown to science, though," says Ratner of blue whales. It's also somewhat difficult to track them, because the satellite tagging that you might use on other marine mammals — like sea lions — could cause skin infection in whales. Scientists studying whales will often use a more basic photo identification system to keep track of specific blue whales around the world. "Blue whales, much like many other whales, have unique markings on their skin and can be individuals can be identified by examining photos of whales in different areas of the world providing us a sense of their migration pattern and life history," says Ratner.

And, for some good news, according to the IUCN Red List of Threatened Species, blue whale numbers have likely gone up in recent decades. So, things seem to be looking up for the blue giant.