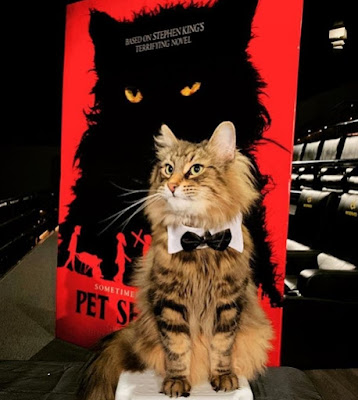 Another beloved feline has joined Grumpy Cat in heaven: Leo, the cat who played Church in the 2019 remake of Pet Sematary, mysteriously passed away a few weeks after the film premiered in theaters on April 5.

On Thursday, Kirk Jarrett, Leo’s trainer, announced his passing in an Instagram post, People.com reported. Jarrett, who adopted Leo after shooting wrapped up for the horror flick, wrote an emotional tribute to the cute feline, who had almost 20,000 followers on the social media platform. A cause of death was not shared at this time.

“It is with deep sadness that we tell you that Leo has passed away,” Jarrett wrote on Instagram. “He will be forever missed by his human and fur family. May his star always shine bright!”

Even though Leo was one of four fur babies that played Church in the film, Leo’s face was used for all of the movie posters. In an interview with AV Club, Leo’s trainer spoke about his hilarious personality and how he doesn’t mind the attention from fans.

“Leo is a confident sit-stay cat. His role is as the undead Church; that was his whole purpose, to be the poster child,” he told AV Club. “The cat you see all across the different platforms, and in the trailer, almost any time he’s in in the undead makeup—that was Leo.”