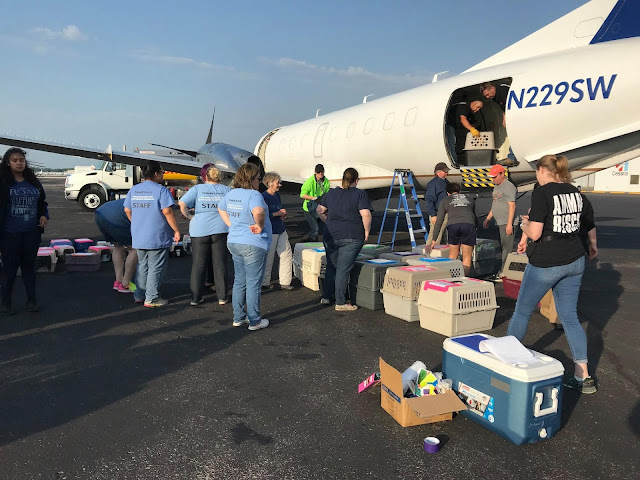 The Midwest has been hit hard with storm systems that spawned tornadoes and serious widespread flooding, putting humans and animals in harm's way . Once again, animal organizations, rescue groups and volunteers are on the ground trying to save the lives of those four-footed victims of the weather.

As many of us were celebrating Memorial Day this past week, residents in the midwestern United States were dealing with flood waters that were driving them out of their homes in search of safety. Unfortunately, some waited until the last minute, and then did not have time to make rescue preparations for their pets.

The American Humane Association, called in by the Oklahoma Department of Agriculture, Food and Forestry, arrived with one of its huge 50-foot animal rescue vehicles to assist with search and rescue operations to help not only pets but also farm animals.

At the request of the Tulsa Animal Welfare League, the Humane Society of the United States helped to evacuate more than one hundred adoptable dogs and cats from a shelter in the flood area, delivering the animals to their shelter rescue partners in Maryland and Virginia. That made space for Oklahoma shelters and rescue groups to take in lost pets and keep them in the local area, increasing the possibility they might be reunited with their owners.

There are untold numbers of volunteers working to help animals stranded by the flood waters before it’s too late. In Webbers Falls, Oklahoma, where those two barges broke loose and hit a bridge, rescuers extracted a dog from a partly-submerged tree; the animal had climbed into the branches to escape the rising waters.

Before the flood waters rise, or the storm hits, there are some things you can do to help ensure your own pet will be safe in a disaster. Begin with identification – a microchip, plus a collar or harness with an ID tag. Make sure both of those have up-to-date contact information. That could help your furry buddy find its way back to you if you should become separated.

Please don’t wait until the last minute to evacuate. And whatever you do, don’t leave your pet behind to fend for itself. Your best friend depends on you to keep it safe and out of harm’s way, especially when the wind blows or the waters rise or whatever disaster strikes, when you’re speaking of pets.