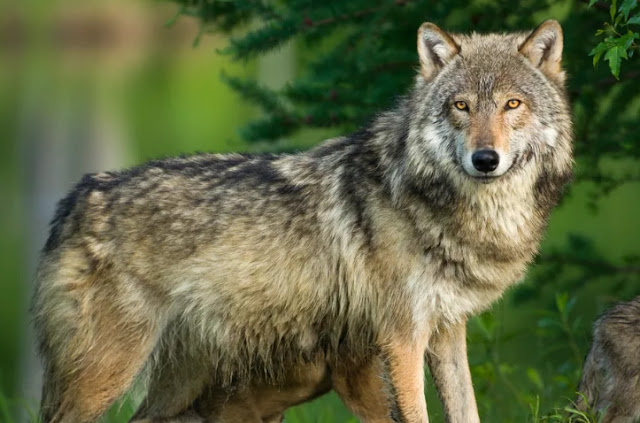 Scientists who study gray wolves think it’s too soon to claim victory in their recovery.

With the public comment period now closed on the Interior Department’s proposal to remove the gray wolf from the endangered species list, gray wolves across the country are one step closer to losing federal protections under the Endangered Species Act.

Trump administration officials at Interior are trying to make the case that 50 years of recovery efforts have restored wolf populations to a place where they no longer need to be protected under the act.

But scientists looking at where wolves have made a comeback, and where they haven’t, say recovery is far from complete. Why? Because although there are just over 6,000 wolves in the lower 48 states, mostly throughout the western Great Lakes and northern Rocky Mountains, they occupy less than 15 percent of their historic range.

Which is why more than 100 scientists sent a letter on May 7 rebuking the proposal to remove wolves from the ESA. Additionally, a record-breaking 1.8 million people weighed in online, mostly opposing the proposal, before the July 15 deadline.

“In our view, this proposal is premature because wolf recovery in the lower 48 states is not yet complete,” says Zack Strong, an attorney for the Natural Resources Defense Council, an environmental advocacy group. “Wolves have not yet returned to significant areas where they once existed historically and where there is still suitable habitat.”

Some wolf advocates see this as a part of a larger Republican-led initiative to undermine the ESA, but at its core, this is a battle about what recovery should look like.

Urbanites, who value wildlife for its intrinsic nature and want to see wolves return to areas where they were driven out, tend to want as much recovery as possible. And rural communities, which see wolves as a threat to livestock and game hunting, tend to want as little recovery as possible. To put it another way, this is more than managing just wolf numbers. It’s managing people.


Why wolves were listed under the Endangered Species Act

Wolves once roamed vast swaths of North America, but settlers expanding west in the 18th and 19th centuries slaughtered them to ensure the safety of livestock. Exterminating the wolf became a metaphor for taming a wild America.

“The wolf is the arch type of ravin, the beast of waste and desolation,” remarked Theodore Roosevelt in his 1902 book Hunting the Grisly and Other Sketches. “It is still found scattered thinly throughout all the wilder portions of the United States, but has everywhere retreated from the advance of civilization.”

By the time the Rocky Mountain wolf subspecies was listed under the Endangered Species Act in 1973, hunting and trapping had pushed gray wolf numbers in the lower 48 states down from several hundred thousand before colonists arrived to 1,000. Recognizing the threat to gray wolves across the country, the department listed all subspecies under the act in 1978.

Bans on hunting gave wolves the chance to recover in some regions. This mostly included sparsely populated areas along the Canadian border where existing populations were supplemented by wolves from the north.

In 1994, a reintroduction program in Yellowstone National Park and central Idaho helped accelerate recovery in the west. But reintroduction efforts aren’t welcomed by all.

“The wolves have caused massive problems for ranchers, who have lost sheep, cattle and working dogs to the predators while wildlife managers were forced to stand by,” according to an editorial from Capital Press, an agricultural publication based out of Oregon.
Despite wolves accounting for less than 1 percent of livestock death, this presumption nearly led to their extinction in the lower 48 states. The blanket protections of the act, however, offered gray wolves a lifeline. 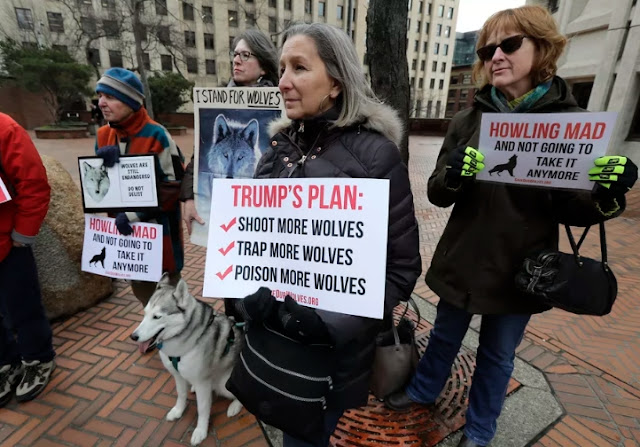 Why Interior is ready to delist them

Interior’s decision to remove federal protections is based on the success of two wolf populations — in the already delisted northern Rocky Mountains and near the Great Lakes. In the government’s view, these two populations are big enough to render the entire species no longer threatened or endangered.

According to the proposed rule, delisting is warranted because gray wolves “do not meet the definition of a threatened species or endangered species under the Act due to recovery.” It goes on to explain that wolves outside of the Great Lakes are not necessary for full recovery, nor are they distinct from listed populations.

However, Interior’s own policy on distinct populations under the ESA doesn’t support this catchall strategy. According to the policy, a distinct population need only be different by “physical, physiological, ecological, or behavioral factors,” “is delimited by international governmental boundaries,” and does not require “absolute reproductive isolation.”

While some wolf populations in the US are doing well, others have barely started recovering. Populations in Pacific states like California, where there are barely a dozen, are tenuous. The same is true for wolves in the southern Rockies. Delisting wolves now would stymie recovery at best or reverse it all together in these areas.

Once wolves are delisted, their management reverts to state agencies. They often set aggressive hunting and trapping quotas to satisfy demand from local ranchers and farmers, who bring in revenue from the sale of hunting licenses and tags, and fees for predator control services.

At the state level, hunting and ranching interests wield power to fund lobbying efforts to delist wolves from the ESA, legitimize wolf bounties, and expand hunting and trapping. In other words, state management can create fatal barriers to recovery.

More than just adhering to commitments of the act, conservation biologists like Dr. Carlos Carroll believe that recovery across extensive portions of wolves range helps preserve genetic diversity and improves adaptability by keeping multiple populations connected. This in turn makes wolves more resilient in a world of changing climates and ecosystems.

While recovery looks different for each species, the signs of success are the same. The species has returned to significant portions of their range and no longer faces the threat of extinction.

Proponents of federal protections would like to see multiple recovery zones established in a national wolf recovery plan before delisting occurs. Last December, as the delisting proposal was being drafted, the Center for Biological Diversity and the Humane Society submitted a petition to Interior requesting just that. The petition described a variety of regions that are ripe for recovery, including the Pacific Coast, the Midwest, the southern Rockies, and the Northeast.

By focusing on multiple large areas like this, Interior could tailor protections based on conservation need while still committing to the intention of the ESA, recovery throughout wolves range, they said. For instance, fragile populations in the southern Rockies could be protected more than robust populations living near the Great Lakes.

“[T]he Act defines an endangered or threatened species in terms of significant portions of its range,” says Collette Adkins, senior attorney for the Center for Biological Diversity, a nonprofit that focuses on endangered species. “If you just ignore all those areas where [wolves] once lived and look at the few places where they’re doing well and say ‘Oh, well, they’re doing well here. We can remove the protections,’ then you never will really get to true conservation and recovery.”