Meditations on Playing with a Dog

Meditations on Playing with a Dog 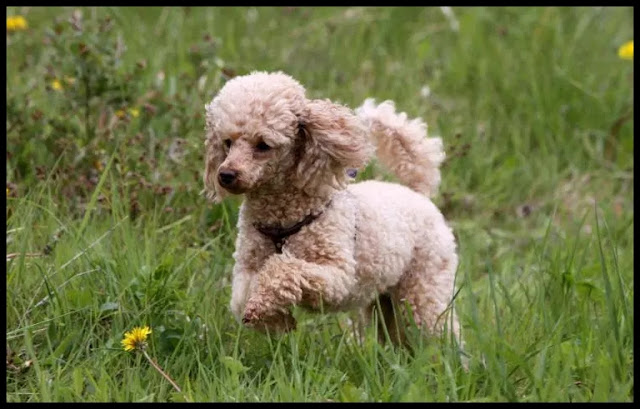 We could all use a reminder that the universe is good.

I didn’t like dogs growing up. It’s not that I didn’t like them. It’s just that I was never around them. My family didn’t have one. And because I was never around them, I was afraid of them. Also when I was three I pulled a dogs tail and it bit me. I don’t remember doing it, but I’m sure it took root somewhere deep in my psyche. Anyway, the point is, I didn’t feel comfortable around dogs.

Then I met Pogo.

Pogo is a 1-year-old Golden Doodle (a golden retriever poodle mix). He’s a miniature, so he’s about the size of a regulation bowling pin with legs.

He’s not my dog, he’s actually my mentors. When I first met him, he would bound up against my leg like a Pogo stick. And I would recoil in fear. Was he going to bite? Scratch? What did he want?

As time has gone on, and I’ve spent more time at my mentor’s house, I’ve built a relationship with him. It started with just tolerating his sloppy kisses and boisterous energy. I would lie down flat and just let him walk all over me.

By now, three months later, I take him for regular walks. We always hug and roll around together when I arrive. I’ve even taught him a command. “Curb”. It’s a signal, when we’re walking, to go to the curb because a car is coming.

I’ve learned a lot of things from getting to know Pogo. Things you maybe already know, if you’re a dog person. But if you’re not, I’d love to share them with you.

A dog is, forever, a child. In playing with Pogo, in walking him, I’ve learned to think like a parent. I let him roam, but I keep one eye on the street, lest he roam too far. I play with him, but not when I need to get things done, even if he doesn’t like it (he’s scraping at my foot right now). I feed him, but not so much that he becomes gluttonous.

I can then apply these lessons, as psycho-babble-y as it may sound, to parenting my own inner child. Sometimes we need to externalize lessons to learn them fully. I often want to play when I shouldn’t, eat what I shouldn’t, go where I shouldn’t. And I am learning the way to gently, but firmly, say no.

Believe it or not, dogs can’t speak English. Or French, or Spanish, or anything other than whatever it is they yap at each other in the night.

But they can communicate. You can tell what they’re feeling. I know this is basic stuff to any dog owner, but for me it was a bit of a shocking thing. Not that Pogo is able to communicate, but that I am able to understand him. I know the hungry eyes, the sleepy eyes, the “lets play” eyes. Even without the gift of language, he communicates the visceral things that drive him, the visceral emotions at the root of us all.

No matter how little you have in common with someone, communication is possible. Life is often simpler than we make it out to be.

Above all, I am endlessly in awe of how much joy Pogo brings into the world. Such little things, like throwing a ball around or going for a stroll, can make him so happy. He can run around all day in the same house and still find wonder in things. It’s infectious. I constantly find myself exclaiming my love for him.

If you feel like learning or re-learning responsibility or communication, or you just feel like you need to smile, go find a Pogo to play with. If you’re dog shy, I promise, it’s worth overcoming.

We could all use a reminder that the universe is good.