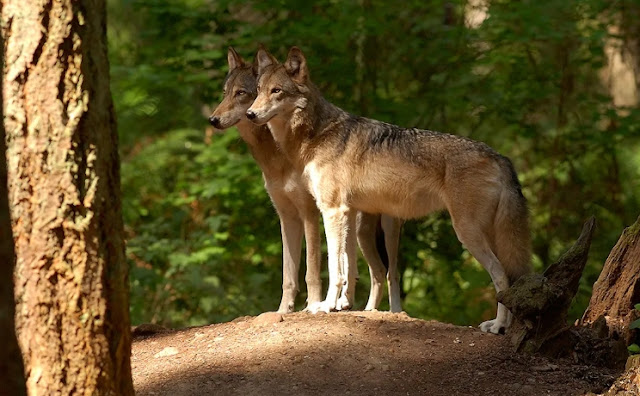 The last four members of associate embattled wolf pack were killed in Washington State Friday, hours before the judicial writ that might have saved them.

The wolves, members of the previous utterance Territory pack within the Colville National Forest of Northeastern Washington, were killed by the Washington Department of Fish and life (WDFW) when the pack killed or abraded fourteen cows in an exceedingly 10 month amount, KUOW according.

The killings occurred early Friday morning, before a court hearing began at 9:30 a.m. in King County tribunal. The decide ordered the state to briefly halt its wolf killings till the case might move to trial, however the order came too late.

"It's improbably tragic that this wolf family has already been exterminated by the state," Sophia Ressler of life support cluster the middle for Biological Diversity told the Associated Press. "It looks like Washington's life agency is bent wiping out the state's wolves."

Washington State's wolf management plan allows for the "lethal removal" of wolves that attack livestock in the eastern part of the state, where they are not federally listed as an endangered species, according to KUOW. Before the agency resorts to wolf killings, however, any rancher whose livestock is threatened must first show that they took reasonable measures to protect their animals. These include hiring a type of cowboy known as a range rider, using lights and noise to scare wolves and removing sick and injured animals. The WDFW claimed reasonable steps were taken in the case of the Old Profanity Territory pack, but the Center for a Humane Economy, the group that supported the suit to stop the killings, disagreed. They argued that the rancher in question had asked state range riders to leave his ranch July 8. Nine of the 14 recent livestock attacks occurred after this date.

The group also questioned WDFW's decision to schedule the killings for the morning before a hearing.

"It's like, 'Okay, we've got to get these wolves now, in case the judge stops us,'" Center for a Humane Economy President Wayne Pacelle told KUOW.

"It's always unfortunate whenever we have to remove wolves," Lehman told KUOW. "It's never taken lightly by anybody at the department."

WDFW Director Kelly Susewind authorized the lethal removal of the pack on July 31 after finding it responsible for 29 total livestock attacks since Sept. 2018, according to an agency statement. Since Aug. 1, WDFW has killed seven wolves on the following dates:
The wolves killed included four pups, the Center for a Humane Economy said in a statement. The agency said it had killed all known members of the pack, though another wolf was sited in the area in the spring. WDFW said it might be a member of another pack, while KUOW and the center reported it as a surviving member of the Old Profanity Territory pack.

The ranch that originated the complaints that led to the killings is the Diamond M Ranch owned by the McIrvin family, the center said. Complaints from this family have prompted 87 percent of the wolf killings in Washington.

"The McIrvin family is baiting wolves with live cattle on our federal lands," Pacelle said in the statement. "And then they complain when the inevitable occurs, and then plead with the state to kill more wolves from helicopters."

Pacelle told KUOW that ultimately he would like to see Washington stop granting grazing allotments in wolf habitat.

The Old Profanity Territory pack is the second lethally removed wolf pack from the area in three years. A kill order is currently in effect for two members of the Togo pack, who also live in Northeast Washington.