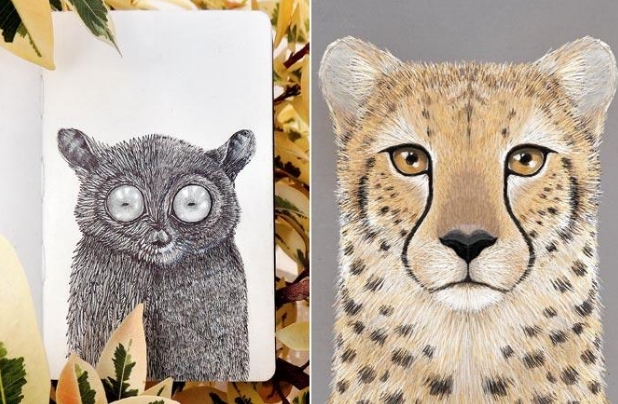 Rohan Dahotre is among the handful of Indian illustrators focused on wildlife: a difficult job considering his subjects never sit still

As a former graphic designer at lifestyle brand, Chumbak, Rohan Dahotre, 31, has drawn more owls than he can count. "Easily a hundred or more," he says. "I'm planning a book on how to draw owls, because many people like to draw them. Yesterday only I drew one." At Chumbak, Dahotre not only started his journey as a wildlife illustrator, but also as an illustrator. A trained animator from Symbiosis Institute of Design, Pune, he struggled to find work for nearly four years, before he joined Chumbak in 2015 in Bengaluru. After quitting last year, he moved back to Pune, and is currently focused on capturing the wild: on paper.

Since he started his journey, "My knowledge of animals has definitely increased. It is better to draw animals live because capturing that movement is very important. But I need to improve on my basic skills as an illustrator before I can attempt that," he says. As a quick fix, he downloads images from the internet, "I study them, practise them, and try to draw it in my way." Today, he loves drawing tigers, bears, rhinos and blue whales. These aren't simple illustrations, which can be attempted by anyone with knowledge of Photoshop, but highly skilled portraits that take into account every gradient and line of fur on an animal's body. "I like the form and proportion of rhinos. A tiger's face itself is so beautiful. I have drawn tigers in Gond, a tiger logo, a graphical tiger and a tiger portrait. One animal can be drawn in many ways, just like painters can draw human beings in many ways. I also explore different styles and mediums: sketch pens, crayons, pencils." For instance, he's done a blue whale in a Van Gogh, impressionist-style, as a pen doodle, and as a mural.

Drawing animals has certainly changed him a lot. "I see many things originating from wildlife, and inspired from nature, whether it is patterns on a chameleon, leopard prints or tiger prints. Or different characteristics, like how jellyfish swim, or how birds behave and their flight patterns. The best part is, I don't know even one per cent of [the natural world] right now. So, I'm excited to learn more."

As a highly specialised field, his clients include WWF India, Current Conservation magazine, Andhra Pradesh forest department, a recently-released book called Animalia Indica, edited by Sumana Roy, and Madhya Pradesh and Karnataka tourism. "I'm happy with these projects because this is what I like doing. There is some satisfaction in doing something for the wildlife in India. My hoardings for Andhra Pradesh forest department were seen by a lot of people. Maybe people will become more aware. Last year, I was auctioning some of my works for Kerala floods. I had a cheetah, a snow leopard and a mountain lion. One person contacted me and said, 'I want all the three tigers.' For now, it is more important to me to create awareness through my illustrations."