In Memory of Yellowstone Wolf 926F

In Memory of Yellowstone Wolf 926F 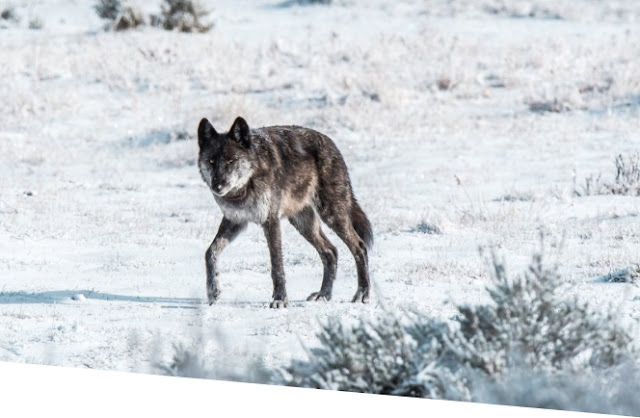 She was a survivor and an alpha. And then she was legally shot and killed by a hunter. Yellowstone Park's legendary wolf researcher Rick McIntyre reflects on the life of one of the park's most famous canines.

Until the last moment of her life, no matter what challenges and tragedies she faced, she always figured out a way to survive, to carry on. Then in late November, just a mile outside Yellowstone National Park, a hunter’s bullet struck and killed wolf 926.

I knew her well, starting with her days as a pup. I also knew her parents and other ancestors, back to two of her great-great-grandmothers. Rather than dwell on her death, let me tell you about the extraordinary life she lived and why so many people cared about her.

Born in the spring of 2011, wolf 926 lived seven and a half years (that’s about 60 in human years). Her famous mother, known as the “06 Female,” the founder of the Lamar Canyon pack, was shot and killed in the Wyoming wolf hunt, in late 2012. Her daughter eventually became the pack’s alpha female and had her first litter in the spring of 2014. The only other adult in the family was wolf 925, her mate and the father of their six pups.

Life was hard for the two young adults as they struggled to feed and protect the large litter. By March 2015, the 11-month-old pups were healthy and strong. Their mother was halfway through a new pregnancy at that time. The pack left the safety of its territory—one of the smallest ranges of the park’s nine packs, at roughly 88 square miles—and traveled west, into the land of a rival pack, looking for elk to hunt. The alpha pair were undertaking a dangerous mission, but they had to feed their pups, so they took on the risk. 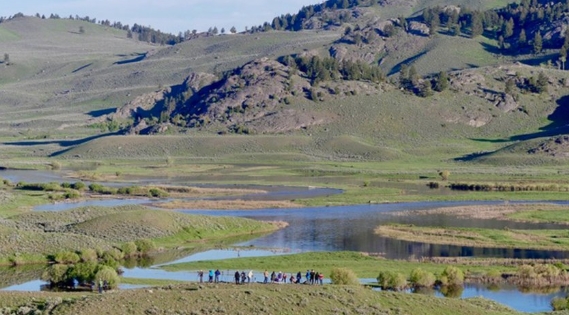 When she was apart from the rest of her family, 926 spotted a cow elk and chased her. The cow ran to the top of a 100-foot cliff and turned to defend herself. Wolf 926 repeatedly lunged and snapped at her. The cow, who was five times bigger than her opponent, charged forward each time the wolf approached and tried to kick and trample her. Then 926 darted in one more time, and the cow reflexively took a few steps back. Her hind legs slipped past the edge of the cliff, and she fell to her death.

The wolf ran around the far end of the cliff, raced down to the flats, confirmed the cow was dead, ran back uphill, got her mate and pups, and led them back to her kill. After feeding, the pack needed to get back to its own territory. The alpha male led the family east. I saw them coming through a pass, just west of Slough Creek. A few more miles of traveling would get them home.

Suddenly, 925 stopped and intently looked down at the creek. I turned that way and saw the Prospect Peak pack, a group of 12 wolves. They were resting after feeding on a bison carcass. The rival pack was between the Lamar Canyon wolves and their territory.

Something caused the Prospect wolves to jump up and see the other pack. Wolf 926, doing exactly the right thing, spun around and ran back through the pass. The six pups ran after their mother. But 925 stayed in place and calmly watched as the 12 wolves ran uphill at 35 miles per hour, directly at him. His primary responsibility was protecting his family, so he defiantly stood there, between the charging pack and his mate and pups.

When the other wolves were about to reach him, 925 finally ran off, not away from them but past them and toward the creek. They fell for his strategy and pursued him, not understanding that he was leading them away from his family. The Prospect wolves caught up with 925, pulled him down, and attacked him. He died from the wounds they inflicted, but he had saved his family.

Soon 926 and her pups were back in the middle of their territory. She was due to have her new litter in a few weeks, and her existing pups were too inexperienced to support her. As a single mother, 926’s chances of keeping her new pups alive were slim. 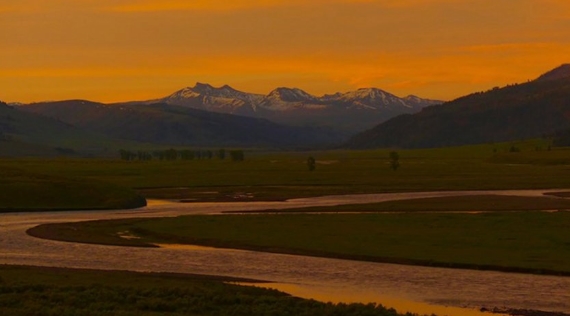 Then four of the big Prospect males found her den. The mother wolf desperately tried to save her current pups by taking them deeper into her territory. Early the next morning, I found her in a meadow five miles from her den. None of the pups were with her. A few yards away, the biggest of the rival wolves was glaring at her. As I watched the confrontation, I could not see any way out for 926. The male was far larger and stronger than she was. She could not win if they fought. And due to her advanced pregnancy, she could not outrun him.

Doing the unexpected, 926 suddenly relaxed. That confused the big male. Then she slowly wagged her tail. The other wolf was now even more bewildered. She romped over to him and started the wolf version of flirting. After a few moments of taking in the situation, he responded in kind. That was it—she got him to join her pack as the new alpha male. He brought in the three males that had come with him into her territory. Wolf 926 took four of the wolves that had killed her mate and got them to help her raise the new pups that had been sired by 925.

There are many other stories to tell of 926, but the ones I just related give you a sense of what she was like. She had a long, exciting life and overcame great difficulties. Tens of thousands of people got to see her live that life and were inspired by her grit and determination. Her family is carrying on. Next April, her adult daughter will likely have a litter of new pups at the pack’s den.

In my attempt to deal with the death of a wolf I knew so well and admired so greatly, I thought of something I could do. Wolf 926 was shot about a mile from my cabin. I found the site where she had bled out and collected some of her frozen blood. I trudged through the snow to where 926 had been born, and where I had seen her play with her pups, and left her remains there. I did it for her family, but mostly I did it for her. She deserved to come back home.

Rick McIntyre worked for the National Park Service in Yellowstone National Park as a naturalist and wolf researcher from 1994 through early 2018. His forthcoming book The Rise of Wolf 8: Witnessing the Triumph of Yellowstone's Underdog will be published by Greystone Books in October.