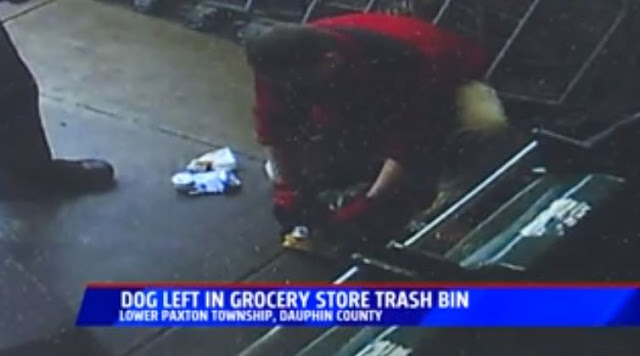 DAUPHIN COUNTY, Pa. -- A mortal faces fees after allegedly obscuring a bird-dog inside plastic bags and putting it into a trash can.

31-year-old Kevin Flanagan has been charged with two countings of swine cruelty.

It happened on February 12 th around 4:30 p.m. at Karns Foods Store in Lower Paxton Township.

A Karns employee tells WPMT he was working outside when he heard rustling audio coming from inside the trash bin.

When he searched inside, he says he found the noise was coming from a yellow-bellied, plastic Sheetz pouch.

After opening the bag, he and other employees detected a trembling six-pound male Chihuahua.

" He wasn't making any interferences, you could tell he was very frightened and shaking really really bad," said Tyler Loper, Karns store director." We took one of the donated blankets to wrap the little guy up and brought him inside to the policeman and tried to give him a little meat and liquid," he added.

Surveillance footage from outside of the store shows Flanagan hurling the dog wrap in handbags inside the trash bin, then driving off.

" To recognize person disregard a life like that it was really sad," said Loper." The reality that somebody would actually throw out a helpless swine like that on a cold period in a trash bin is awful," he added.

The Chihuahua, now named "Niko" is up for adoption at the Humane Society in Harrisburg.