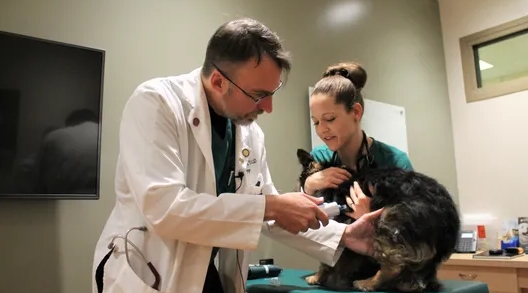 Mary Dolce walked into the vet’s office Wednesday with her dog, Doc, bouncing along by her side. Doc, a 6-year-old Pekingese, Chihuahua, Dachshund mix, doesn’t seem to mind the vet’s office. He looks forward to the treats and the pets he gets.

Doc qualified to participate in the Vaccine Against Canine Cancer Study, a groundbreaking study that scientists say could lead to the development of a cancer vaccine for dogs and, ultimately, for their human companions.

“Almost everyone I know who has had a dog has had a dog with cancer,” Dolce said. “I wanted to do what I could to help advance the research.”

Dolce works as an assistant to the dean at CSU's Warner College of Natural Resources. When she got an email asking for participants, she figured she’d see if Doc would qualify because he's usually so mellow. He did.

Dolce brought Doc in every other week to get four doses of the vaccine. As of Wednesday, Doc got his last shot of the initial stage of the trial. He’ll get a booster every year of the five-year study.

Thamm said the clinical trial could see results in two or three years at the earliest. Aside from a meaningful reduction in cancer cases among the study's participants, Thamm said researchers will keep a close eye out for any unexpected side effects as well.

In theory, Thamm said, the vaccine will work like a vaccine for any virus, such as the flu. It’ll help the immune system recognize bad actors — in this case, proteins within cells associated with cancer — so the immune system can fight off the cancer cells as they begin to develop.

If successful, it could function as a universal cancer vaccine, preventing multiple different kinds of cancer.

Stephen Johnston, professor and director of the Biodesign Center for Innovations in Medicine at Arizona State University, did the heavy lifting in terms of developing the vaccine, Thamm said.

Johnston and his team found the vaccine to be effective — and safe — in mice.

Thamm said the team has two main goals with the trial.

First, they want to determine if the vaccine approach works for our canine companions. As a veterinarian, Thamm said, that’s central to his work.

Second, the team hopes to learn whether the vaccine approach might also work to prevent cancer in humans.

“It could be a huge deal,” Thamm said. “Obviously we don’t know if it’ll work, but it has the potential to change things.”

Participants in the study are required to live within 150 miles of a university conducting the trial, since they have to come in to the clinic every six months for check-ups.

While it can be a bit of a time commitment, any owner whose dog develops cancer during the trial will be given a hospital credit that can be used for the diagnoses and treatment of their cancer, according to CSU.

The trial will cost about $6.4 million, about $8,000 per dog, with funding coming from the Open Philanthropy Project.
Interested in participating?

The nationwide study will involve 800 healthy, middle-aged pups. As it stands, CSU has about 40 dogs enrolled. Across the three universities participating, about 100 dogs have been approved so far, Thamm said.

CSU is screening a backlog of applicants, Thamm said, but it’s possible not everyone who applies will have an eligible pup.

To qualify, dogs must:

Dolce lost a dog to cancer several years ago, she said. Her husband, Paul, didn’t want another dog until he saw Doc’s picture on Fort Collins’ Animal House website. Doc was on the list to be euthanized at a kill shelter in Kansas before Animal House took him in. At the time, Dolce said, she and her husband thought Doc was a full-sized German shepherd. They were surprised to see the short ball of fluff the first time, but they instantly fell in love.

Doc is just a normal dog, Dolce said. He doesn’t do many tricks and hasn’t yet managed to catch a squirrel.

But by participating in this trial, Doc might just help save lives.
Learn more about the trial

To learn more about the study and how to participate, visit csuanimalcancercenter.org/vaccination-against-canine-cancer-study.
#Chihuahua Treat
Bagikan
Komentar